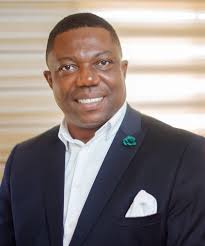 Dr. Charles Anum Adams is a distinguished scholar, University Professor, professional Civil engineer, Transport practitioner and a minister of the gospel. Over the last almost three decades, he has worked as a professional engineer in Ghana and abroad. He completed the BSc(Hons), Civil Engineering with First Class honours in 1991 and received several awards for excellence including the Levine Prize for the Best engineering student, the Iddoris Allotey Prize for the Best Student in Engineering mathematics and a British Council ODA Fellowship to pursue postgraduate studies in the University of London, Imperial College of Science, Technology and Medicine of the University of London (UK) where he completed an MSc in Transport, and then a PhD in Civil Engineering with a specialization in Transportation. From 2016 to 2020 as manager of the Road and transportation Engineering programme at KNUST, he envisioned setting up the Africa Centre of Excellence in Transport which started in 2019 with both academic and industry network across Africa and other global universities. He is the Director of TRECK and the Leader of the Centre for Sub Saharan Transport Leadership (CSSTL) hosted at the Kwame Nkrumah university of science and Technology, Kumasi.

Prof. Adams has had stints and maintains active collaborations in the Indian Institute of Technology Madras (IITM), Chennai, India, University of Cape town, South Africa, University of Birmingham and University of New Castle Upon Tyne (United Kingdom), Technical University of Munich (Germany) and the Ecole Polytechnique Federale de Lausanne (EPFL), Switzerland to mention a few. He is the moderator of Civil Engineering Programmes in KAAF University College, Buduburam and Accra Institute of Technology and served as external examiner and assessor on several graduate programmes. He is widely published and has attended and chaired many local and international conferences. He is a sight after speaker and has made several invited presentations. Since 2004, he has served in various capacities as Regional executive, national councilor and member of the Executive committee of the Ghana Institution of Engineering (GhIE). He is Fellow of the GhIE and the President Elect of the Ghana Institution of Engineering.

He has worked as Consultant on several projects in Ghana, Republic of Sierra Leone, Uganda, Liberia. He has distinguished himself as a professional engineer and consulted at the National level for both private and public projects and undertaken several assignments for development partners such as the World Bank Group, European Union, the GTZ, JICA to mention a few. Prof. Adams has expertise in traffic and transportation infrastructure systems planning, design, monitoring and maintenance. He has provided training, consultancies and technology transfer at all levels for the Ministry of Roads and Highways, Department of Urban Roads, Department of Urban Roads and the Ghana Highway Authority, National Road Safety Commission and the Kumasi metropolitan Assembly. He is married to Mrs Josephine Adams they have three children Stephanie Pearl, Daniel and Carl Teddy and live in Kumasi.